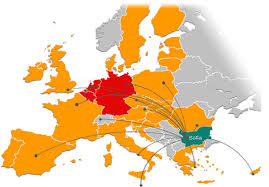 The Ministry of Economy and Energy in Bulgaria has recently announced that according to the latest statistics Bulgaria is the second most attractive outsourcing destination within the European Union. The only country with better results is Estonia. The Baltic republic has so far achieved remarkable progress as investment destination despite the crisis, which is not that surprising taking into account the overall steady development of the country throughout the transition period.

Bulgaria is, however, the pleasant surprise in “outsourcing terms” since such ratings is usually typical for countries with much more developed economies.

But which are the factors for the Bulgarian outsourcing “miracle”?

• Proximity to the West European Markets – this is actually the most frequently stated reason for the progress of the country in this area due to the fact that many European countries are more inclined to register branches and outsource their departments to physically closer destinations that are within the EU.

• Relatively High Qualification (Foreign languages skills) – the educational level in regard to foreign languages in Bulgaria is quite impressive. Over 70 % of high school graduates study two languages – and that is especially important for the proper functioning of the outsourced departments and their communication with the management.

• Favorable Tax Environment – taxes in Bulgaria are among the lowest within the EU and the flat corporate tax seriously helps attract foreign investors.

• Low Operational Costs – labor costs as well as many other typically operational costs are quite low. This contributes to the improvement of the economic efficiency of the company /departments/.

The concentration of foreign companies’ offices is mostly in the capital city of Sofia. That changes to a large extent the state economy since there have been natural migration processes on the labor market and respectively – serious infrastructural development mostly in Sofia and the adjacent region.

According to most analysts the outsourcing expansion in Bulgaria will continue and will even reach other regions following the overall state infrastructural development and the overconcentration of such firms in the region around the capital city. That will invariably stimulate the national economy and will result positively in even greater economic prosperity.